Life has been busier than ever lately, so it’s been a while since my last post.  I’ll spend this post updating you on the current state of affairs of Lucha Megadrive.

So yeah, a WHOLE lot has changed. As of now we’re about three weeks out before Gold Master is due. For the past couple of weeks our team has really worked hard and come up with some amazing results. The artists have a lot on their plate, from working on the new environment, tweaking and fixing animations, and texturing Winter, there’s been a lot of visual oomph added in! Our designers have also been balancing and tweaking moves with the new character – Nuclear Winter, and our UI is getting some much needed love.

On the Programming Side…

The game is finally feature complete! The programming team has been focusing on fixing bugs, adding polish, and implementing any last features needed for out Training and Trials mode. I in particular have been working on the Tutorial, which is something I’ll cover in it’s own post. 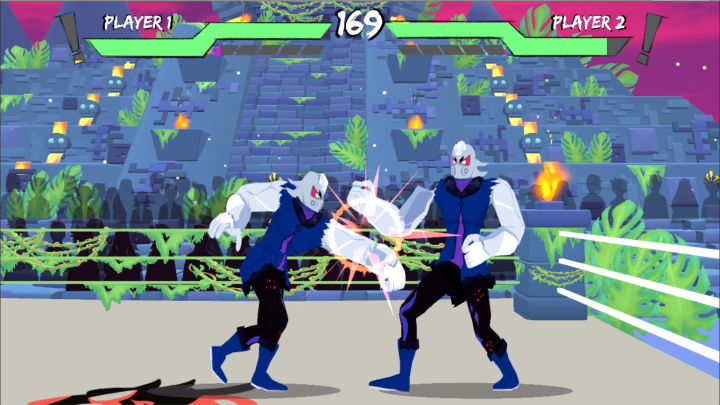 I also worked hard on implementing Winter specific features in the past couple of weeks, and getting her into a final playable state. I think she’s looking fantastic and I look forward to see what players think!

My plan is to work hard the next couple of weeks to get the game into its best possible state for gold master. Because I’ve been going a little light on the blog posts I’ll take some time to delve deeper into specifics on some of the work I’ve been doing recently, but for now I wanted to make a quick update on the overall state of the game.