This week was a bit of a doozy, but we still managed to get a lot done!

We have a guest audio designer that will be contributing to our team by making sound effects. I set up a sound manager before that did the job in the time we had, but our sound designer requested that we integrate FMOD into our project, saying that it would greatly increase their workflow. After taking a look at FMOD with our sound designer, I agreed and made plans to gut our old audio engine.

It was a learning process, but FMOD is fairly easy to work with. I got a basic workflow set up so that our sound designer could path the appropriate sounds to the right events. From there, it’s up to me to fire those events in their appropriate situations in the gameplay logic. The system is also flexible enough to easily add new events and sounds as design requirements change moving forward. Since we don’t have replacements for every sound implemented thus far, I made a dummy scene to prepare and test the architecture, so implementing what I’ve done won’t take too long once we have enough sounds to work with. 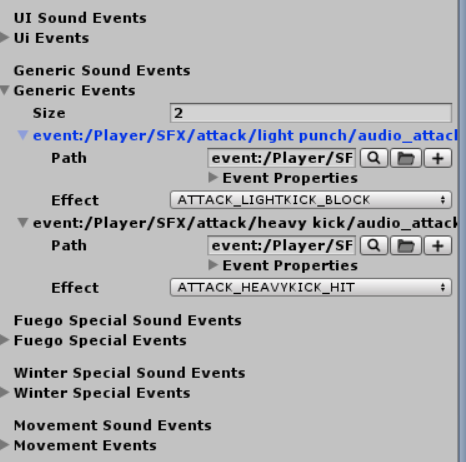 Now our sound dude can hook up all the events they need to!

Trials mode in a fighting game consists of set combos that a player has to perform in order to move on to the next. This can range anywhere between badges of accomplishment earned by doing cool things or even teaching the player some decent combos they can use in an actual match. 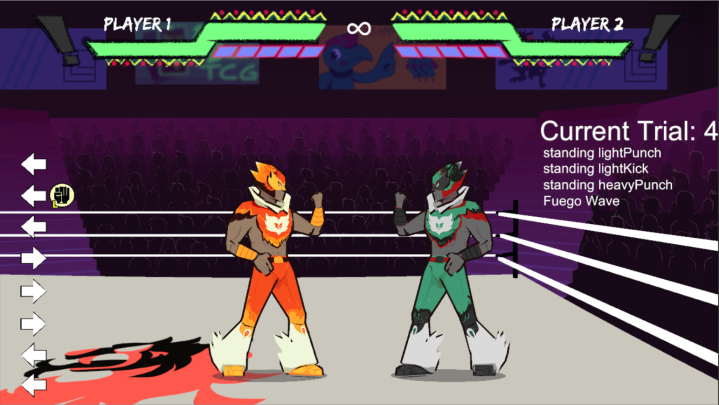 Trials can get pretty hard

Duncan and I tag teamed this one, we both made the architecture for our solution and implemented different parts. He handled a lot of the core implementation while I’m working more on feedback and UI options. The main goal was to come up with a tool that would allow our designer to easily make, and modify trials at ease. Happily, the systems I had made in the previous semester greatly aided us in this endeavor. By exposing inputs and motions to the editor, our designer can make and test trials on the fly, while on our end we just read the current input and state of the character and check if it matches the current move in the trial. Trials mode is working and ready to be expanded on as we move forward!

It was another fairly productive week for us programmers, (beyond these things I worked on typical things like bug fixes and tweaks). Team wise, things were a little more tense than normal this week. Right now our game is undergoing a bit of an art revolution, so there’s a lot of stress on the art team. Unfortunately, our art lead had to leave for the week, and I feel like that combined with several other factors has resulted in some miscommunication about art progress and art plans moving forward. As systems lead I’ve been supporting as best I can from the programming side… which means I can’t do much. Despite all this I feel like our team is almost past this hurdle, and after that I know it will be smooth sailing.